Isabel Lucas strikes a pose at the premiere of her film Immortals held at the Nokia Theatre L.A. Live on Monday (November 7) in Los Angeles. 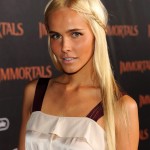 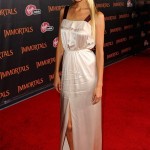 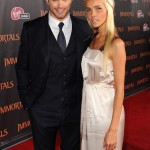 The 26-year-old actress, who looked fashion forward in a Roksanda Ilincic dress, Stewart Weitzman shoes, and Gray Gallery jewels, was joined by her co-star Kellan Lutz, 26.

Kellan brought along his rumored gal pal Sharni Vinson to the big premiere!

The Immortals hits theatres in 3D this Friday . Be sure to check out the trailer in case you missed it.

A new trailer for Vince Vaughn’s new film “The Dilemma” has been released after CNN Journalist Anderson Cooper visited The Ellen Degeneres Show and criticized a scene in the film. Anderson Cooper and GLAAD’s protest of Vince Vaughn film where according to Mr. Cooper they used the term “that’s so gay” in a pejorative way. GLAAD stands for “Gay & Lesbian Alliance Against Defamation”. All this BUZZ caused the studio to release a new trailer.

In the first trailer of the film, Vince Vaughn’s character says: “Ladies and gentleman, electric cars are gay.” Cooper told Degenres, “I was shocked that not only that they put it in the movie, but that they put that in the preview. They thought that it was OK to put that in a preview for the movie to get people to go and see it.”

The Dilemma is set to be released on January 14, 2011. GLAAD released a statement on Friday about the scene saying, “It’s hardly a joke for LGBT audiences growing increasingly frustrated by use of the word ‘gay’ as a pejorative.” The group also adds: “GLAAD expressed these concerns directly to Universal Pictures prior to the trailer’s release, who have now assured us that the offensive joke will be removed from TV and Media campaigns promoting the film from this point forward.” 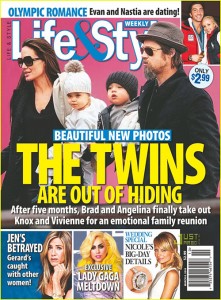 Hollywood celebs Brad Pitt and Angelina Jolie brought 19-month-old twins Knox and Vivienne out of hiding on February 22 for a stroll through beautiful Venice, Italy.

According to Life & Style magazine who has the deets on the family affair: “[Angie] was fussing over the twins to make sure they were covered,” a witness tells the mag. “She was being a very loving and doting mom. She even wanted to make sure their little ankles were covered — it was very cute!” The cold wasn’t getting them down. “The whole family seemed happy,” the witness adds.