Teen actress and singer Taylor Momsen wears very high heel buckled boots as she films a new scene for Gossip Girl with Penn Badgley, in New York City, on Wednesday, October 6. The 17-year-old star will go to Baltimore with her band The Pretty Reckless to perform at The Quarter, next Sunday. 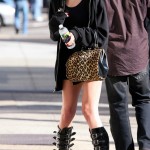 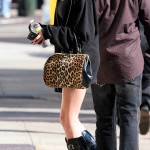 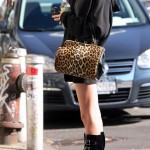 Taylor wasn’t on the first couple of episodes of Gossip Girl but Jenny Humphrey is back and so is her style. With a sky-high platform and a thin spike heel, the boots go up to the knee with eight buckles on each side. Paired with a leopard purse and an oversized hoodie, the shoes made quite a statement: “I can’t wait until we see them in an episode.”

Not Taylor Lautner this time. It’s Taylor Momsen. This teen girl is 16 years old, can you believe it? She wears out a pair of hooker heels during the Warped Tour at the Comcast Theater on Sunday, July 11. This event was held in Hartford, Connecticut.

The young actress and singer, known for her role in “Gossip Girl” and her band, The Pretty Reckless, got the crowd going with their songs. She also let some guys stick in dollar bills as a “tip” in the clear platform part of her high heel shoes. That’s one way to make a quick buck, Taylor! Also, she is currently the face of British fashion chain New Look, for their Spring-Summer Collection 2010. Take a look at the picture. What do you think?