Gerard Butler is shooting his new movie, Coriolanus, in Belgrade, Serbia. These pics were taken on Wednesday, April 28. 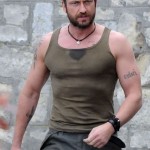 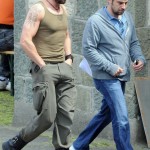 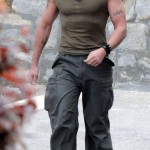 The 40-year-old Scottish stud will play Tullus Aufidius, commander of the Volscian army, a banished hero of Rome who allies with a sworn enemy to take his revenge on the city. It’s a contemporary version of Shakespeare’s Rome-set political play written in 1605.

It’s also Ralph Fiennes directorial debut, who stars in the movie too. Gerry is completing a circle with this movie. While pursuing a degree in law many years ago, the opportunity to pursue his passion for acting came when he auditioned for a stage production of Coriolanus, and he’s finally doing it now.