American actor and musician Jared Leto at the 2010 MTV Video Music Awards held at Nokia Theatre L.A. Live on Sunday, September 12, in Los Angeles. The 38-year-old artist was accompanied by his “30 Seconds to Mars” bandmates: Tomo Milicevic and Shannon Leto. 30 Seconds to Mars picked up Best Rock Video for “Kings and Queens” Music Video. Jared said: “This award belongs to the most amazing family of friends and fans around the world that we could have ever imagined.” 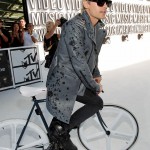 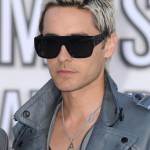 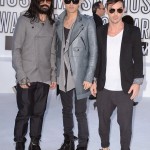 Directed by Jared Leto, the music video takes place in an abandoned downtown Los Angeles and shows kids riding bicycles. It’s a transfixing clip and certainly deserving to be put on a pedestal with the rest of the rock video elites.

Lady Gaga may have her Little Monsters, but the Echelon (The fans of 30 Seconds To Mars) are as devoted as any hardcore fan group out there, and as Leto said during his acceptance speech, the victory was as much theirs as it was his. Congrats!