Kim Kardashian shows off her curves in a body-hugging white jump suit to kick off the 2010 Bullrun Live Rally in New York City. The Bullrun Live Rally is the most glamorous and high profile of the new breed of high-end luxury lifestyle automotive rallies. Kim looks super sexy in this white tight suit and surely got more than a few engines started at the show! 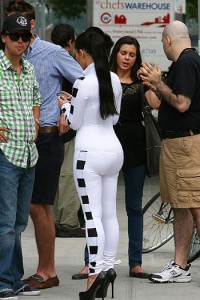 Obviously, all eyes were on the official flag babe as she waved a green flag to kick off the event. This annual event is filmed for the TV show “Cops, Cars and Superstars,” in which one hundred of the world’s hottest cars embark on an eight-day race that ends in Las Vegas. What do you think? Post a comment below. 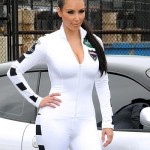 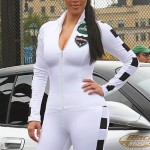