You can find a lot of news about Alexander Skarsgard lately. True Blood Swedish actor just arrived back home to Los Angeles via LAX airport. Alexander and director Peter Berg arrived together from Honolulu, Hawaii, on Saturday, July 10. They have been working on their new movie, Battleship. This film will be released in 2012. 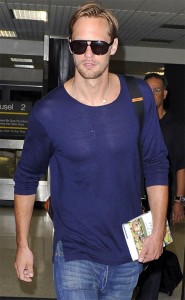 Alex was seen shopping with her girlfriend Kate Bosworth, yesterday, July 11. Later, they were spotted picking up groceries from Bristol Farms. They are a happy couple!

True Blood, season 3, is currently airing on HBO. This season will follow the plot of the third Southern Vampire Mysteries novel, Club Dead.