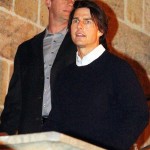 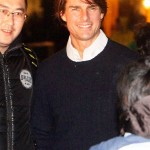 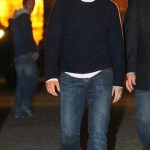 Tom Cruise is staying at a hotel in the Old Town of Prague, Czech Republic. The 48-year-old actor visited the same place in 1995 to shoot the first Mission Impossible film, directed by Brian De Palma. Another sequel of the MI series being shot in the Czech Republic was enabled by the government programme of incentives for foreign film productions. Actor Simon Pegg and director Brad Bird are in town to scout locations for the upcoming movie co-starring Jeremy Renner.

In the picture you can see Tom Cruise and his wife, actress Katie Holmes, with their daughter Suri Cruise, as they return to their hotel in Prague, Czech Republic on Wednesday, September 22.

It’s been almost fifteen years since the first movie was released in 1996, and while some of you think it’s time for the franchise to move on, Tom is going full steam ahead with the next installment. The cast may also include Jonathan Rhys Meyers, Maggie Q, Ving Rhames. It it not known if Michelle Monaghan will return to this new film.

Mission: Impossible IV is set to be released in December 2011.