British Supermodel Naomi Campbell has admitted that she was given diamonds in the form of “small dirty looking stones”. These stones turned out to be diamonds from men she believed to be representatives of former Liberian dictator Charles Taylor. Miss Campbell, 40, was subpoenaed to appear before the UN war crimes tribunal, where Charles Taylor stands accused of 11 charges of war crimes in Sierra Leone, including counts of murder, rape and sexual slavery.

In court, Miss Campbell said she’d actually been gifted a selection of smaller gems following a 1997 charity bash at Nelson Mandela’s house. Two men knocked on the door of Campbell’s room late at night, explaining. They handed her a pouch which she opened the next morning and found it contained “a few small very dirty looking stones”.

Naomi Campbell also testified Thursday that she had never heard of Charles Taylor, Liberia or blood diamonds when she met the Liberian dictator in 1997. 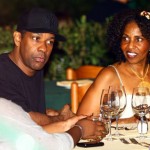