Actress and now producer Nicole Kidman sits on the panel at the press conference promoting her new film “Rabbit Hole”, during the 2010 Toronto International Film Festival held at the Hyatt Regency in Toronto, Canada. The movie premiere was sold out and received a standing ovation at the end. 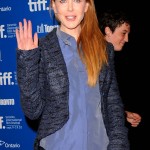 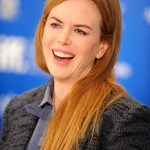 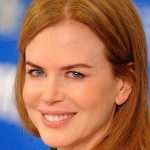 “Rabbit Hole” is a Tony Award-winning play by David Lindsay-Abaire, and examines a couple mourning the loss of a child after a hit-and-run accident. Kidman, who won an Academy Award in 2002 for her portrayal of English novelist Virginia Woolf in “The Hours,” literally sweated through a news conference at the Toronto film festival. She said: “The reason I’m wearing this jacket is because I’m sweating under here and I can’t take it off ’cause this shirt shows it”.

“I feel very exposed, very nervous,” she explained. “It’s a whole different ball game because it’s so personal when you’re in a film but you’re not responsible for the film.

Aaron Eckhart, best known for his role in “The Dark Knight”, co-stars with Kidman in the film directed by Director John Cameron Mitchell.