British celebrity Katie Price gives a masterclass in marketing and prints the cover of her new novel on a tight swimsuit. Her latest novel is called Paradise, though it could be argued her huge chest wouldn’t have been troubled by a longer title. Launching her latest tome, she squeezed into a cleavage-busting black bathing cossie. Check the pics below. 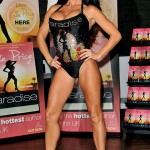 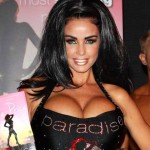 Miss Price knows how to play the media and get our attention. While most celebrities pose in front of a desk in WHSmith to launch their new book, Katie decided to use the tried and tested method of getting her kit off during her book launch at HMV in London today.

Katrina Alexandra Alexis Infield Price, previously known as Jordan, is a British celebrity. She is a businesswoman and former glamour model whose personal life is regularly featured in British celebrity gossip magazines.