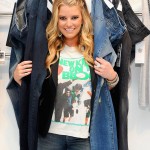 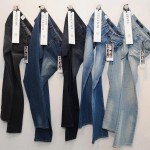 The 29 year old singer and actress wore a vintage New Kids On The Block T-shirt from What Goes Around Comes Around. “It was the very first concert I went to!” she laughed. Jessica’s brand empire has reportedly made $500 million from all of their shoes, handbags, swimwear and lingerie. Along with her denim creations, Jessica Simpson’s line will include woven and knit tops and it’s set to be released for Fall 2010.