Reality star Kim Kardashian was spotted out in New York City on her 30th birthday on Thursday, October 21. She tweeted, “I woke up to the sweetest bday messages! Seeing all of your tweets will make me smile all day! I love u guys!!!!” And then she wrote: “Welcome to the 3rd level someone just said to me! Its the 30 club. Its all VIP from here on out!!” 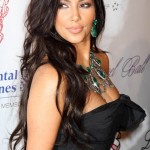 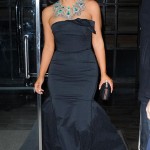 Kim later attended the Denise Rich Hosted 2010 Angel Ball to Benefit Gabrielle’s Angel Foundation held at Cipriani, Wall Street. Having already celebrated two early birthday fetes, she’s preparing for a big party at Glo Nightclub in Westbury, New York on Saturday night, October 23. Everyone is invited, this is not a private party, so if you are in the area, I have feeling it will be a great night! Also, rumor has it, the E! star will be doted with a birthday cake worth over $1 million dollars.

Danielle Orsino, a spokesperson for Glo Nightclub, told Radar Online, “The jeweler is going to encrust the cake with loose diamonds worth over a million dollars. Their goal is to break the record for the most expensive cake ever made which was 1.65 million dollars.”