American actor and musician Jared Leto rides around the Soho neighborhood of New York City on his new trendy bike with a friend on Tuesday, August 31. The 38-year-old artist was joined by his older brother and drummer, Shannon Leto, as they picked up food at Olive’s for lunch before heading back home to eat. 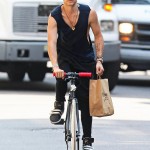 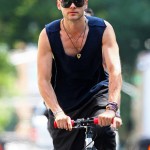 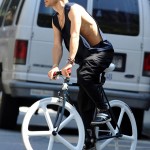 Last week, Jared and his “30 Seconds to Mars” bandmates performed at the 2010 MTV World Stages in Mexico City alongside other groups like the Smashing Pumpkins. Fans went crazy for Leto, his brother Shannon Leto on drums, Tomo Millicevic on lead guitar and Tim Kelleher on bass. Since then, they lead a crazy show at the New York State Fair Monday night.