Australian Actor Hugh Jackman and his wife Deborra-Lee Furness pick up their daughter Ava, 5, from school in NYC’s West Village on Thursday, September 23. The 41-year-old Wolverine actor and his wife walked unnoticed by passersby through New York’s West Village district. 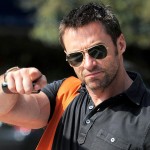 Hugh recently wrote a letter to the Speaker of the United States House of Representatives, Nancy Pelosi, asking her to make sure the Improving Nutrition for America’s Children Act is voted on and passed this month. As a father of two, we’re sure the health of his kids is always on his mind.

Also, it has been reported that Hugh will use a vegan diet for his upcoming “Wolverine” sequel. He hired vegan nutritionist Brenden Brazier to help him bulk up for the role. Hugh credited the diet for giving him his buff looking physique while filming the first “Wolverine” in 2009, when he added on 20 pounds of muscle.