Glee actors and musicians Mark Salling, Harry Shum, and Cory Monteith play around at the “Guitar Hero: Warriors Of Rock” video game launch at Hollywood’s Paramount Studios on Monday, September 27. The back-lot venue was transformed into a New York block party and a replica of the historic CBGB’s venue for a unique blend of music, art, food and gameplay. The night was capped off with a “one night only” performance by the rock band Soundgarden. 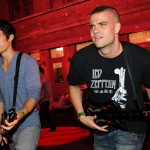 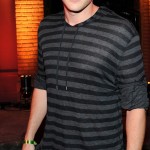 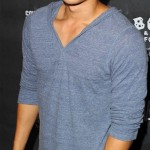 Tonight, one of the most talked-about TV episodes of the season will finally find its way. The Britney Spears-themed episode of “Glee” airs tonight at 8/7c on FOX. It will bring some of Spears’ biggest songs to McKinley High. So while star Cory Monteith will be knee-deep in pop music tonight, he got in touch with his rock side at Paramount Studios yesterday. He was joined by the members of Soundgarden, rocker and “The Hills” regular Ryan Cabrera, “The Office” star Craig Robinson and professional wrestler Mike “The Miz” Mizanin. The new game features 93 tracks, including all seven parts of Rush’s legendary “2112.”