Beautiful actress Odette Yustman and her lover Dave Annable, the star of “Brothers & Sisters”, walk together at the Fat Tuesday Pre-ESPYs Party on Tuesday, July 13. The Pre-ESPY Party was held at Boulevard3 in Hollywood, California. The ESPY Awards is an annual awards event created by ESPN to celebrate their legacy as a sport channel. 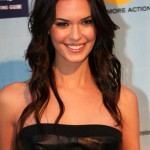 The fifth season premiere of “Brothers & Sisters” will air at 10PM ET/PT on Sunday, September 26, on ABC.