Kim Kardashian announced on Twitter that she was getting measured. Kim sparked rumours that she will be the next celeb to get her own wax figure after posting a photo while having her booty measured. 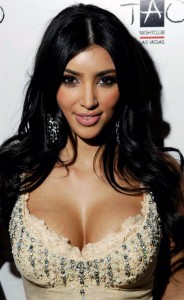 Wearing a white dress, the 29-year-old reality beauty used her official website to get fans guessing. It is likely that this TV star and NFL Miles Austin girlfriend, is being measured to have a wax figure inspired by her fabulous self, according to People magazine editors.